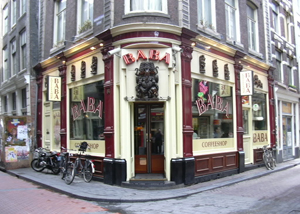 Baba is sat smack bang in the middle of the Red Light District, making it a very interesting place to sit and watch the world go by. It’s Eastern, Hindu theme is in complete contrast to it’s surroundings of prostitutes in windows, sex shops and adult theatres, and I think this is plays a big part in its charm.At the front of the coffeeshop there’s high tables and stools lacing the windows making it a good setting to people watch, but then further to the back of the coffeeshop there’s a more relaxed approach with low to the floor, comfy couches. On saying this, the techno and electric dance music that’s played in there might make it a little bit harder to get into that relaxed and chilled frame of mind.

The space muffins and the space brownies are highly recommended by pretty much everybody that has ever had one. Some people going as far as saying it’s the best space muffin or brownie they’ve ever ate.